The last day of our Roman adventure. And what an adventure it has been! 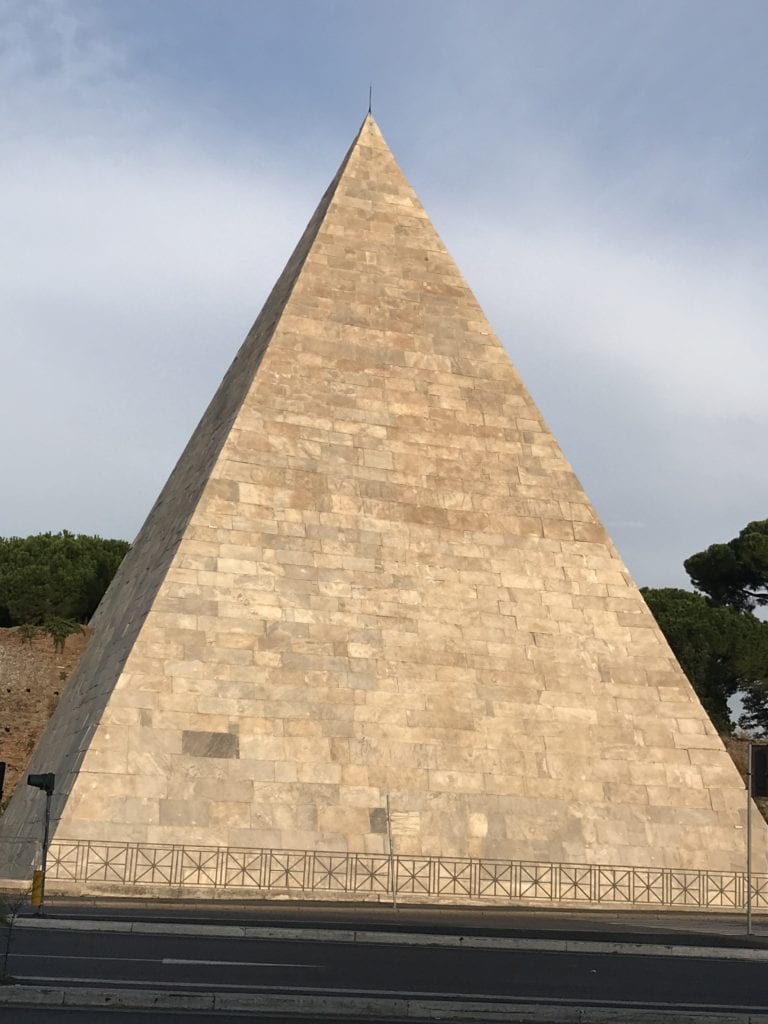 Pyramid of Cestius. We took the metro to meet Luigi, an architect who lives in Rome near Piramide. He was coming with us to Ostia Antica. He told us about this pyramid which looked new against the backdrop of the ancient city. He said it was restored just 3 years ago so that’s why the dramatic difference in looks. It apparently was black before it was restored due to its being centuries old. The pyramid was built about 12 BC as a tomb for Gaius Cestius, a magistrate. It has a fascinating history – click on the link above if you want to learn more.

Our metro experience today was a lot better. We even had music for a portion of our trip.

Ostia Antica is an ancient Roman city that dates back to the first century. This was a very important city back in the day because it was a seaport for Rome. Due to silting the town later turned into marshlands and now lies 3 kilometers (2 miles) from the sea. It was abandoned around the end of the Roman Empire and deteriorated. When Mussolini came to power, he wanted Ostia to be restored, so the excavation and restoration began and continues today.

Luigi talking about the construction. He was such fun and had a lot of interesting architectural facts about Ostia (ancient and new). 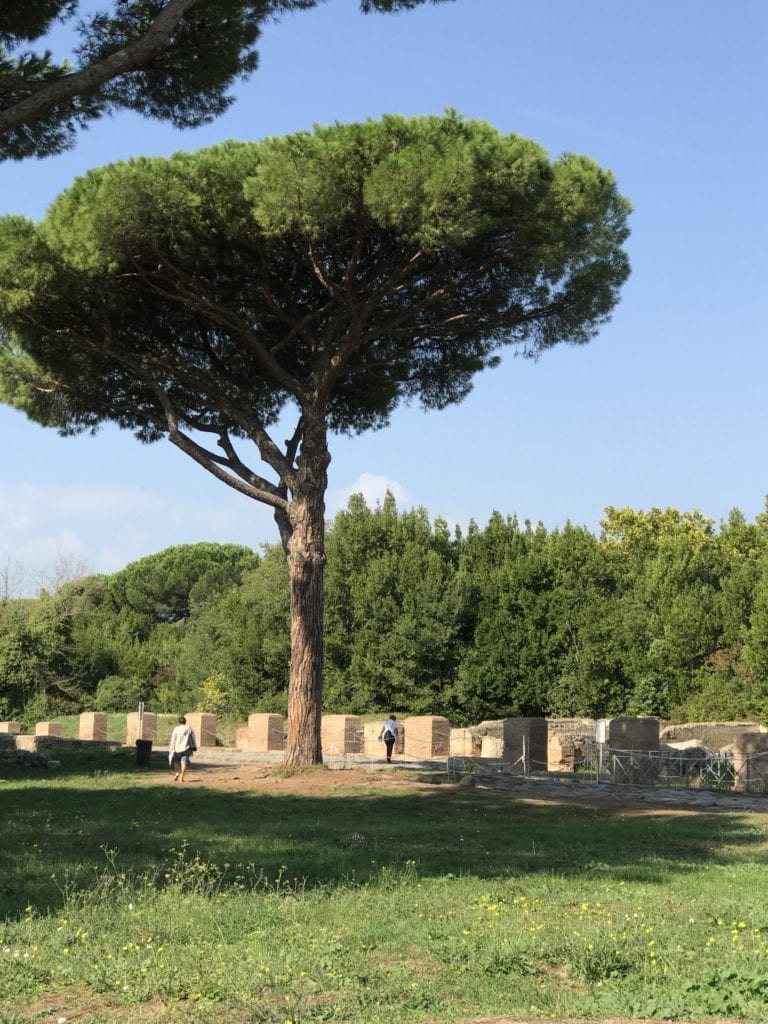 The pine trees at this architectural site were ancient and huge. I wanted Antimo to climb up one of them and bring down a pine cone so we could get the pine nuts out of it, but he declined that request. Can you blame him? 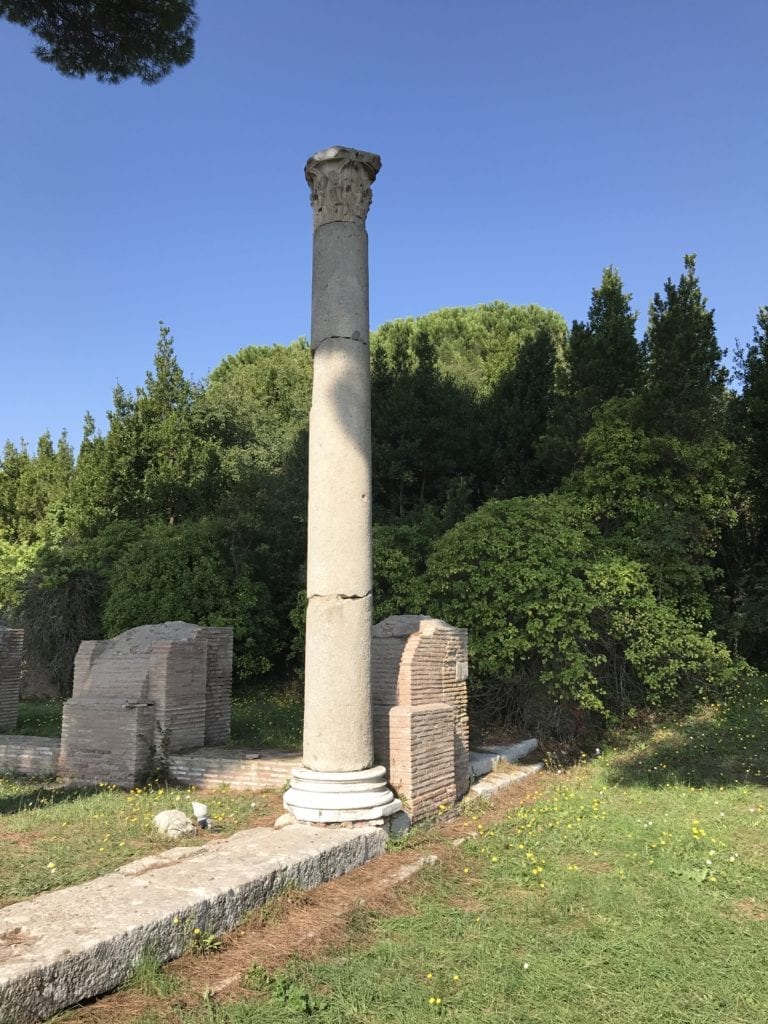 This must have been a rich house in Roman times where this pillar remains.

We learned a lot about how this town was built by walking through it. It took 2 1/2 hours to walk through half of it! The cemetery was on the outside of town for obvious reasons. Back in those days, you wouldn’t want the stench and ugliness of graves and crypts in the town, however, some of the burial sites were pretty dressed up compared to the slab of stone we use today. 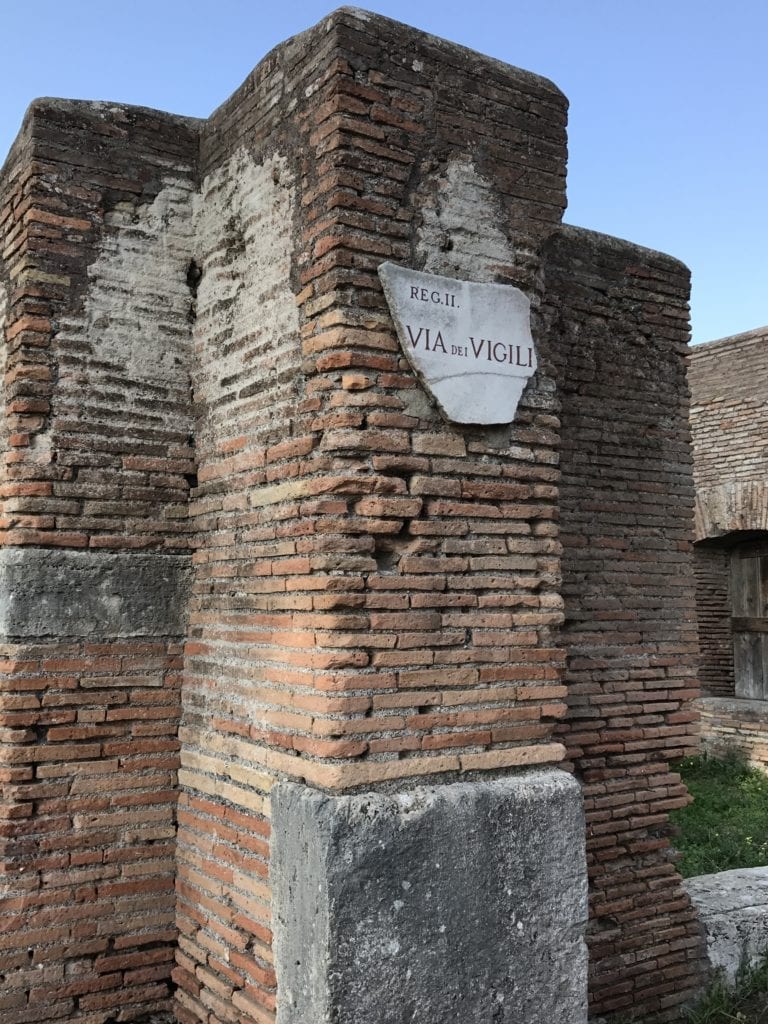 So how is it that the street names in this ancient city are clearly visible, but when we were trying to find our way on the streets of Italy we couldn’t find a street sign to save our lives, with or without the GPS. Okay so this is a restored or new street sign but I had to vent on the lack of visible street signs in Italy.

These marble pillars were behind (or in front of – depending on your view) of the Colosseum in this city. Unfortunately, as restoration has occurred over time, cement was used to fill in.

This Colosseum is in pretty good shape considering its age. Handrails are new. 😉 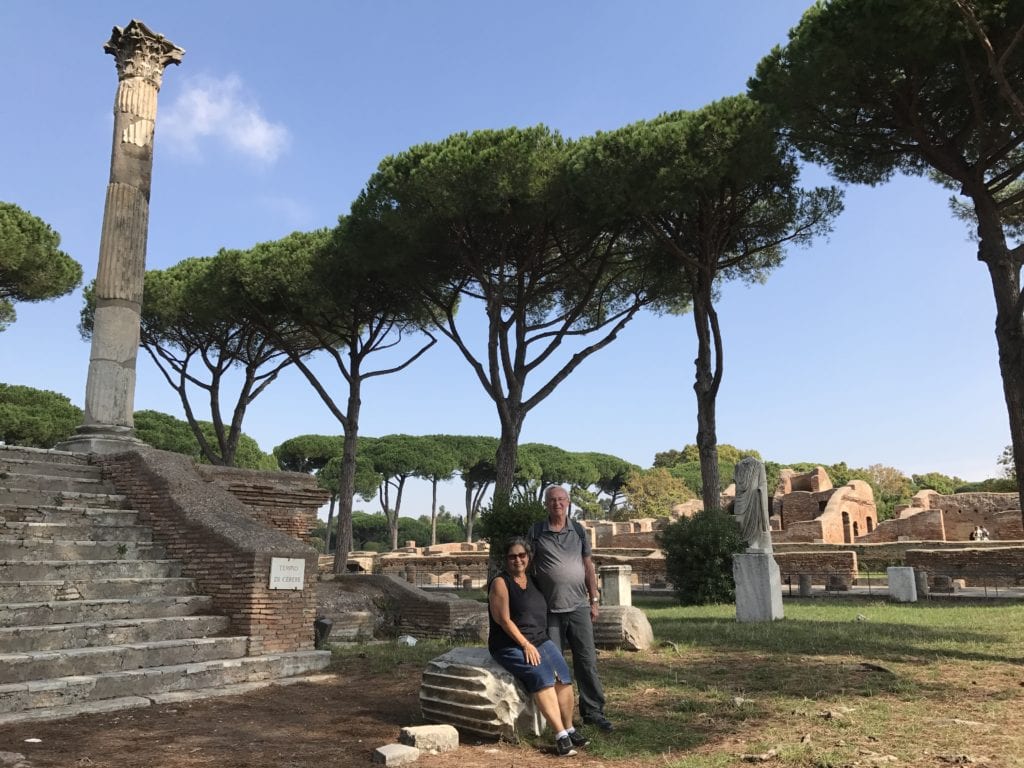 Taking a break from walking sitting on an ancient marble column. 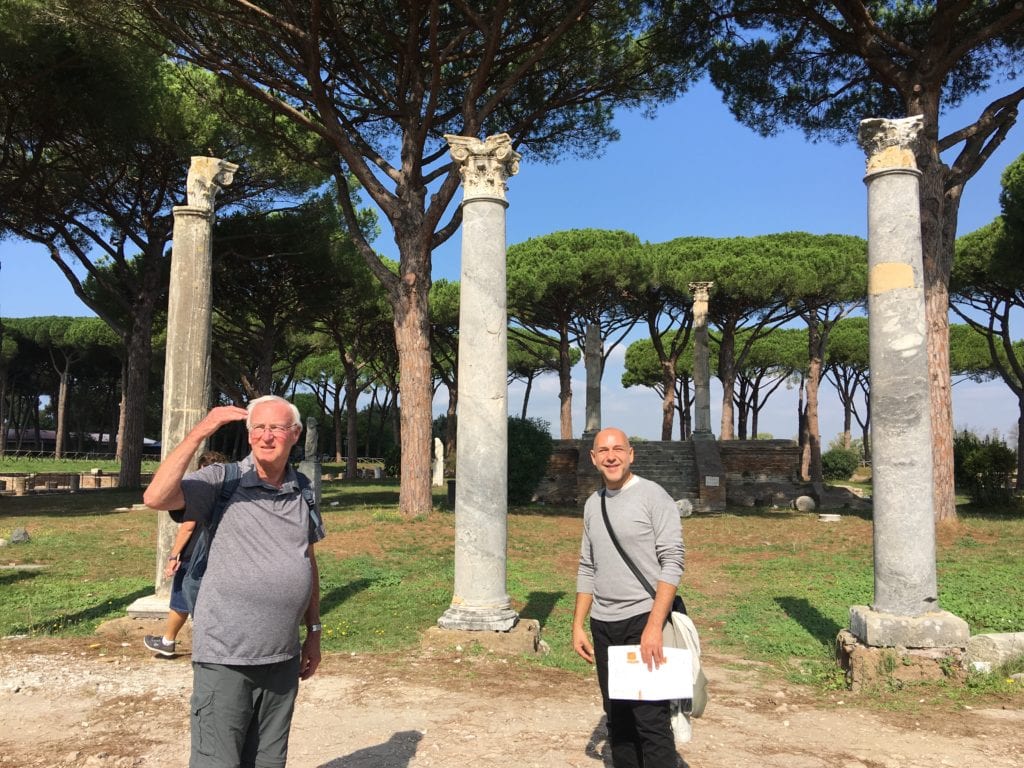 Ricardo and Luigi trying to figure out where the Roman baths were. Well, they had them here with mosaic floors! What treasures have been found in this ancient area.

Okay, we’re off to lunch – we deserved it! 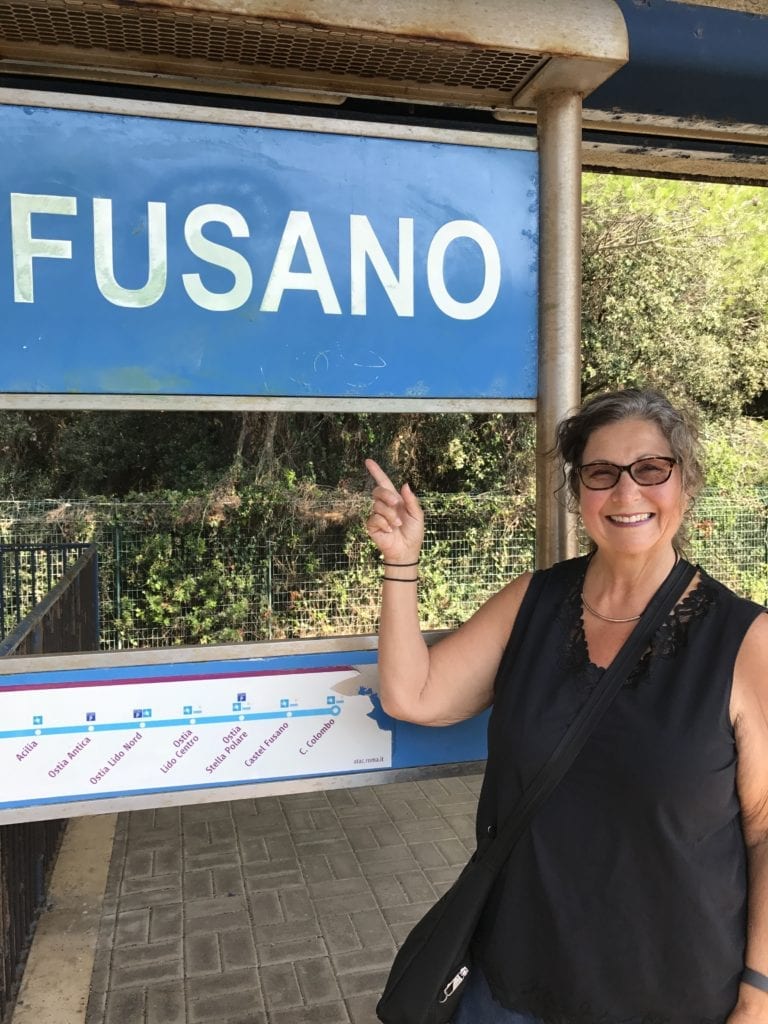 Look what I found? This city is named Castel Fusano and is a few stops on the metro from Ostia Antica. My mother’s maiden name was Fusano and although my grandfather came from Bari, I’ll have to investigate when we get home if I have any long lost relatives here. 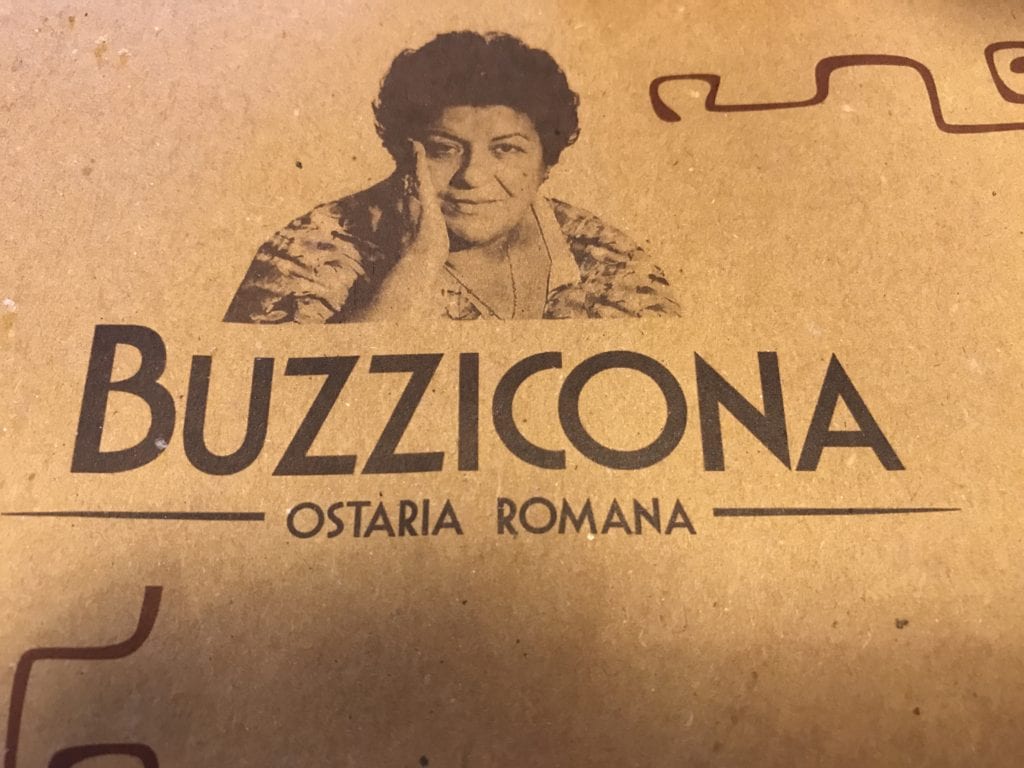 This is the restaurant where we had our Roman lunch. The name is supposed to mean fat lady. Well, thanks a lot fellows for bringing me here! 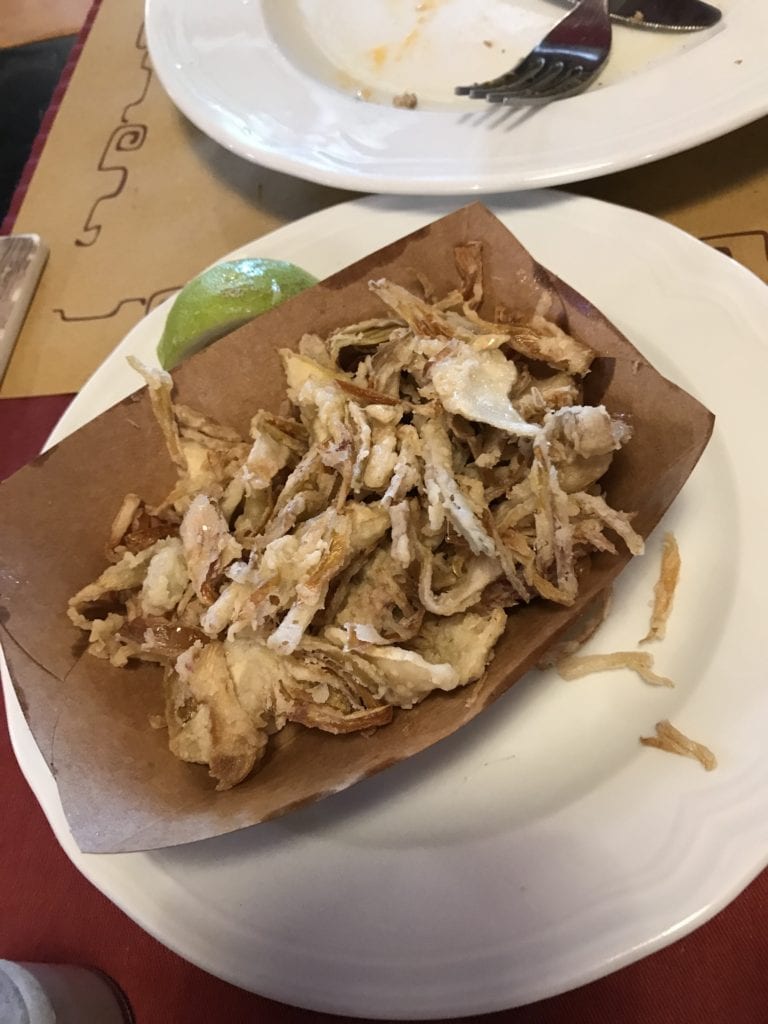 This is an interesting dish – it is fried artichokes that are cut very thin. They were delicious, almost like eating chips. 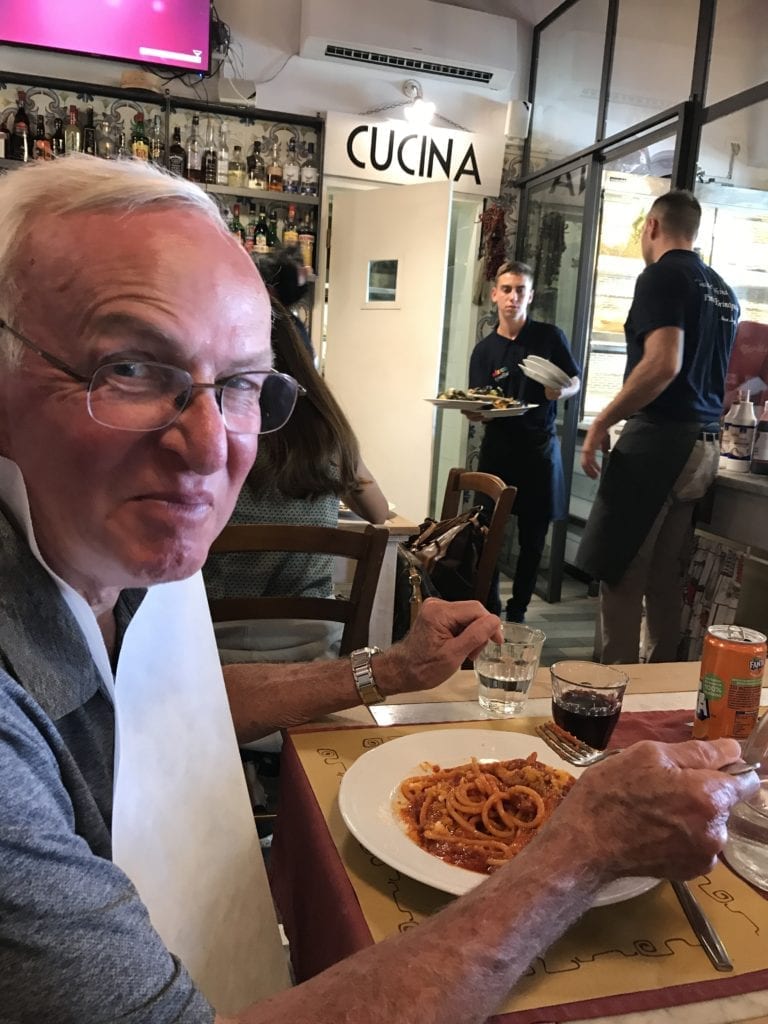 Bucatini was Ricardo’s choice after a few plates of appetizers. 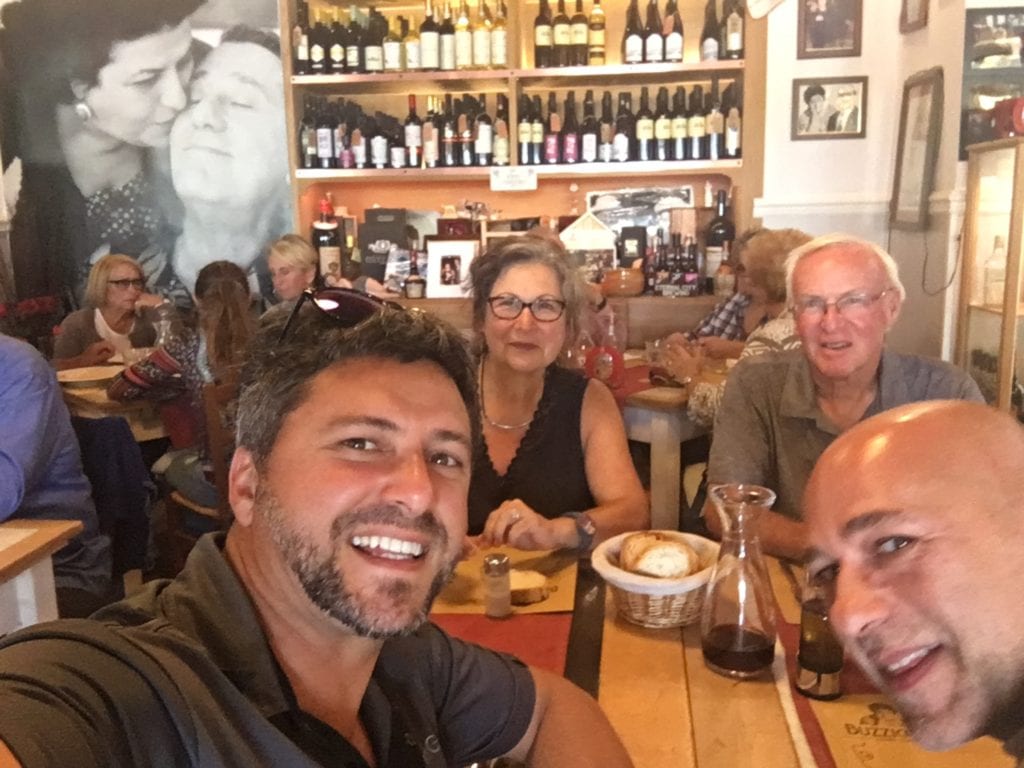 Our motley crew taking our bread and wine sustenance after a lot of walking. The black and white picture in the background is two Italian movie stars that used to frequent this place.

An uneventful metro ride back to the apartment, however, we did see some gypsies get on the train at our fateful stop in Termini where we were robbed yesterday. A lady was instructing her kid how to spot someone to steal from and what to do right in front of us! When she heard Antimo cautioning us and translating what she was saying, she got off at the next stop with the excuse she had gotten on the wrong train.

No coins were thrown in the Trevi Fountain this trip. Not sure we’ll return to Rome anytime soon.

Hard to believe we are moving on to our last destination of this trip tomorrow. Packing for Florence. How did all this stuff fit into our suitcases four weeks ago and now it won’t? We even took the cookies and wine out and ate and drank them along the way. Hmmmm.