First thing in the morning was to go to a Boot Sale – which is a flea market where people have “stuff” in their trunk (boot) and sell it. It was so cheap it was hard not to buy everything. I did find a few  things – hope I can get them back home without breaking.

We had a lovely day visiting small Cornish towns, following the road along the sea. Fantastic views. In Ramehead we visited a Coast Guard lookout. The Coast Guard volunteers were counting people on small boats in their area because these smaller vessels wouldn’t be picked up by radar. It was fascinating to watch these two men work together to identify a boat and the number of people aboard and what direction they were headed. They told us this helps the Coast Guard because if there is a weather problem, or if someone reports a boat missing, they can check their logs and help with information.

Before we left the Coast Guard lookout, the men told us to look for a small picket fence just a few feet by a few feet as we were driving away. They said that marked the grave of a famous sailor from their village. He requested being buried standing up and facing the sea. They did not know if he was saluting but they did know that he was standing up in his grave. Only in Cornwall!

Close by this lookout were small cottages that were built before WWII as holiday retreats. You weren’t able to live them in full time then, but now they are allowing people to fix them up and live in them. They are probably about 400 sq. ft. and are located on the side of the hill looking out over the ocean. They have million dollar views.

One town we visited gets flooded often because of how it is situated on the seashore so the houses located in the lower levels of the village have these boards that slip into a slot in front of the front door to keep the water from coming in. Some have drainage grates for the water to escape. It seems like a good method – don’t know if it works well, however, they are still standing hundreds of years later, so there you go.

We ended in the afternoon back at the same pub that Gill’s friends own and run. Before we got in the door, the people sitting outside already knew that we were visiting from Oregon, etc etc. It was very small town and very funny how fast news travels.

Dinner tonight was at an Italian restaurant. The best part of dinner was the garlic bread. Enough said. Tomorrow we return back to Stroud to pack and get ready for our flight to Italy on Tuesday.

Love the way the trees bend over the street. Don’t know how large vehicles get through this. 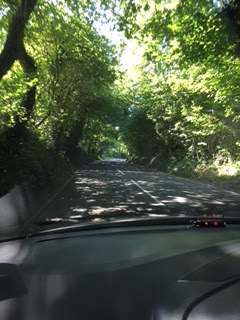 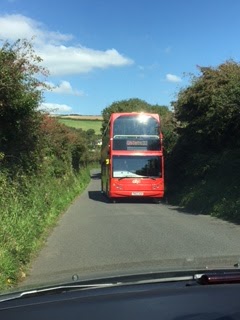 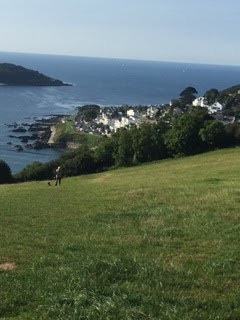 Gate in Kingsand with a view to the sea 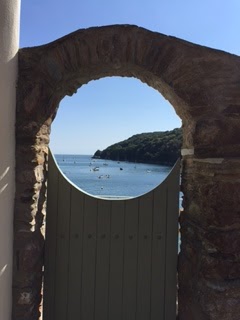