Off we go into the wild blue yonder……. Our one month adventure to England and Italy had begun. Our journey starts in England, visiting London for a few days before joining our friend Gill in the Cotswold countryside.

We took Condor Airlines from Portland to Frankfurt and really enjoyed it. We upgraded to Premium Economy and were shortlisted to check in at the airport and board the plane. Our seats were roomy-ish and tilted back nicely but of course after 9-12 hours sitting in any seat you can get fidgety. Food was almost palatable which is good on the scale of airplane food.

For some reason the Frankfurt airport just challenges us each time we go through it. Our plane arrived on time but we only had 1 hour between catching a flight from Frankfurt to London. We asked how far it was to the gate and were told about 7 minutes. Now you have to know my knee decided to lock up and my achilles was acting up by this time so it was limp and gimp for the first 10 minutes and then after going through security AGAIN, getting lost finding the gate that had to be at the end of the hallway to hell, we were running. Approximately 55 minutes later, we boarded the plane to London. Last people on board – we are happy we made it.

Our hotel in London is great. They upgraded our room from a closet to a business suite. Yay! So our England adventure begins. The staff here is so very nice, in fact the customer service person walked us down the street to a pub because we had asked her to recommend one close by. It had been raining – imagine – and we didn’t want to walk too far in the rain. Well, actually we didn’t want to get lost in the dark on our first day. We waited until the second day to do that.

At this point we start our eating and drinking experiences in London. We had dinner at the Swan – a typical English pub. 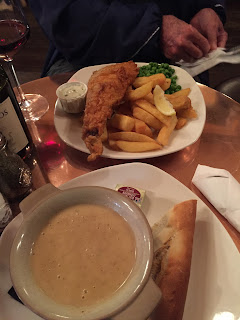 We were less than enthusiastic about ordering, well, anything on the menu. We had carefully thought about McDonalds but thought we’d be brave and try something new. Dick ordered fish and chips and I ordered roasted cauliflower soup. Well, I have to say they were both very good. Now maybe it was having a glass of wine before, during and after dinner that helped, not eating anything but a few bites of something undistinguishable on the plane, (oh wait, Dick had a candy bar in there somewhere), but I truly have to say dinner was tasty.   Back to the hotel to watch a little British TV – which promptly put us to sleep. Day 1 done!