This day was an adventure that could not be planned by any agency, tour company or bumbling tourist. However, Antimo orchestrated a perfect day.

We did have a challenge getting to Alberobello because every train crossing we came upon had the guard rails down waiting for a train. We were told that in the olden days there was a man at every crossing in a house adjacent to the tracks and when he was alerted to the train coming he would lower the safety gates (heaven help the town if he was caught sleeping). Now they put the gates down automatically but so far in advance that traffic gathers for miles in each direction before the local 3-car train passes.

Then you have to drive through every small town from here to there because there is no motorway or highway for us to take. We got behind some old man on a bike and that is the speed we went until we could safely go around him. Sound like Portland?

When we first arrived in the town with the trulli, I used the bathroom in a gelateria (because you know we hadn’t eaten in 2 hours so before we took the trulli tour, we had a gelato). Anyway, I got stuck in the bathroom and couldn’t get out. Luckily Debbie (from Portland) heard my banging on the door and pushed it in so I could get out. She later had the same experience. Not the best engineering on that door system.

The trulli structures were fascinating to see scattered across the countryside. There are 60,000 of them. They are made of limestone so you will only find them built where the limestone is located. People built them from what they found in the ground and built the house around it. They date back to before the 1500’s. The walls are about 4 1/2 feet thick and made of 3 layers. You have to build the roofs from the bottom up because there is no support in them.

When the landlords came around to collect taxes for having a house, the people in the trulli would take off the keystone and the roof would cave in so that they could say it was not a house, just a barn for animals. This happened about once a year and then they would build the roof back again. Some trulli have symbols on their roofs which are either pagan or christian.

After the trulli tour our local guide gave us cookies and mozerella because you know we hadn’t eaten in an hour. Of course, we were on our way to lunch but……

Our next adventure of the day was to go to a small massuria for lunch. The owners of this farm worked with cows, producing milk and cheese. The massuria owners put on a lunch spread that was over the top fabulous. We ate in the barn which had been restored. All homemade dishes and everything was delicious. Of course after lunch out came the fruit and pastry – after drinks like limoncello and espresso.

I needed a nap and we were not in any hurry to leave, so went outside to sit on the grass and relax. As people finished their lunch and drinks they too came outside and we sat around on the grass just visiting and enjoying a perfectly lovely day. About 5:00 pm or so we left the farm, said goodbye to our hosts and headed to dinner. I know, really? We were all soooo full we were very glad that the restaurant we had planned to visit for dinner was closed that evening.

We visited another small town on the way back to Manduria, walked around the old parts of the city, had a coffee and then traveled back to Manduria. Ahh, a delightful day. 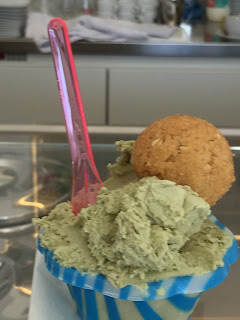 Lunch at the massuria. I don’t think there was enough food. These cut outs in the walls is where the cows used to eat hay. They are shaped like this because their horns were quite large in the olden days and this shape created space for their horns. 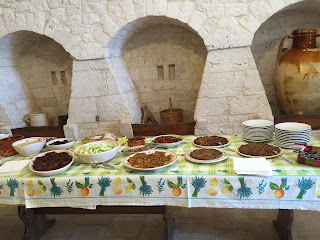 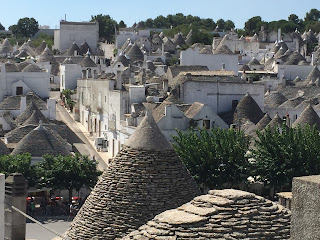 Sangria with primitivo wine, peaches, and other fruit 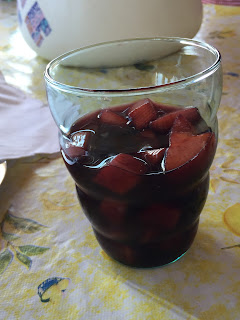 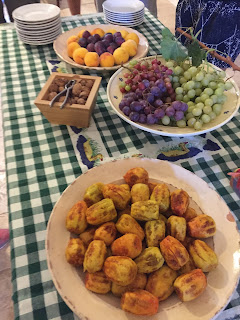 Cows whose milk made tasty cheeses 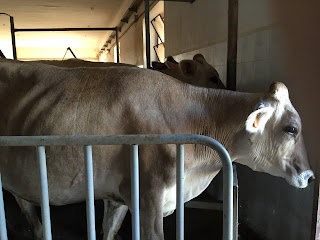 Dick and I in front of a trullo 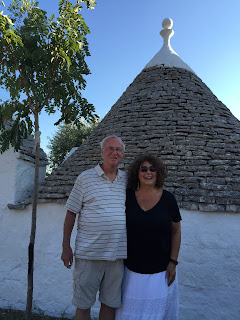 Drinking coffee in nearby town 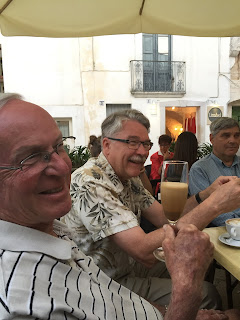