Today we had reservations to visit inside Buckingham Palace which I think is only open to the public a few months of the year. We were going to walk through Hyde Park – it looked like a small distance on the map and I googled it at some point in time in my prep work and was confident we could do this in 1/2 hour from our hotel. The concierge at the hotel begged to differ with my stats. He recommended taking the 148 bus. So we did, going in the exact opposite direction! We kept waiting for the bus to get somewhere near Buckingham Palace or announce it, but alas, no.

When we were about 1/2 hour from our appointed tour time, we were on the other side of the Thames River. We realized we just weren’t going to get there on the 148 bus. We finally asked for help and the bus driver told us we should take the 148 bus, but going in the opposite direction. Well, we could have figured that out by now – duh! But then he told us the bus route only gets close-ish to where we wanted to go, so we’d have to walk a ways.

At this point it dawned on us we weren’t going to make our appointment for the tour. When all else fails, hail a cab. Our cab driver was very nice and got us there just in time to present our tickets and enter the Palace grounds. Whew!

We figured there would be a lot of opulence in the rooms, walls and ceilings, furniture, etc., but were amazed at how much original artwork there was just in the State Rooms. Original Dutch artists and others whose names I can’t remember, although Vermeer is one artist that comes to mind. The headsets they give you explained a lot of the artwork on the wall. The mere size of some of these paintings was overwhelming.

We asked one of the security men (they are stationed about every 10-20yards) about one room that wasn’t talked about on the tour and he launched into this fascinating story about how that room connected the secret passages from the Queen’s private rooms to some of the pubic rooms. There were huge mirrors (about 30 feet tall) on the wall that opened up from this secret room/passage. He was very animated when speaking to us, I don’t imagine many people really engage these security people other than to ask where the looe is located. We really enjoyed this tour and would recommend it to anyone who enjoys that type of thing.

Then we had to have tea in the Queen’s garden, of course! Speaking of tea, while we were lost in the city, we saw a double decker tour bus that was a tea and tour, so inside the bus it was set up with tea tables and on the upper deck and people were supping tea as they were having their tour of the city. How cleaver! And we found out how double-decker buses became popular. At an event in London more people wanted to attend than they had originally expected, so some cleaver lad put benches on top of his bus and brought in twice as many visitors to the event. That launched the double deckers – at least according to the tour we took.

Before leaving the Palace we were routed through the gift shop, of course. They had an abundance of royal crowns of all shapes, sizes, types. Interesting fact, one crown that was designed for the Queen that we saw in Buckingham Palace could be turned into a necklace as well. I wonder if I could turn some of my necklaces into crowns – or maybe not.

At this point we decide to take a double-decker red bus around the city like every other tourist. As if we hadn’t taken enough detours this morning – BTW – a detour is referred to as a diversion on their street signs – I know this because we saw a lot of them. Major parts of the city was torn up while we were there as they are putting in another underground train. And, yes, we were on a diversion of our own constantly. We took the red line and saw Big Ben 2 of 3 times before we figured out it was going in a loop. Transferred to the blue line and passed marble arch and several other landmarks 2 or 3 times. As the song MTA by the Kingston Trio sang in our heads (words go something like: did he ever return, no he never returned and his fate is still unlearned) we get off the bus to have lunch.

We found a cute little pub (The Three Tuns – I know what a name!) on some side street near Oxford Street – where all the shops and stores are (be still my heart). But I knew I had to feed Dick or he wouldn’t be my sherpa for any shopping. Again we decided to try something different. Dick had bangers and mash and I had a chicken pot pie that came with peas and mash. We were both surprised by how great the food tasted. We decided this was dinner too because there was so much food. I don’t remember getting these big portions that last time I was in England.

Now this whole day Dick is toting around an umbrella because, you know, it rains in England. While rain threatened all day it didn’t start to fall until Dick says, “It never rained todayand I carted this *%$# umbrella around all day.” Minutes – no wait – seconds later it started to rain. Of course! We walked back to the hotel from the last bus stop we recognized and thought we’d stay in for the night – we’d had enough adventure for the day.

Tea at Buckingham Palace in the Queen’s Garden 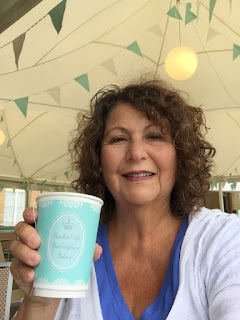 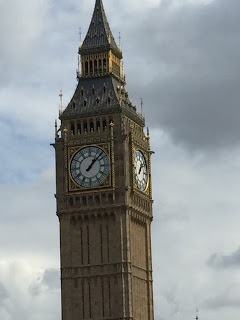 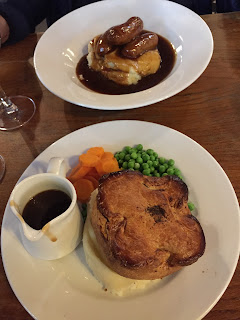 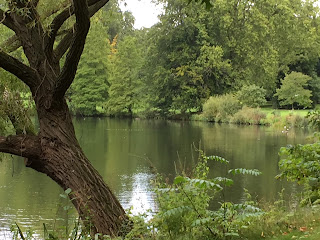