Our last day in London was more relaxed. We found these telephone booths – such a shame they are not being used. They were filled with trash and had graffiti all over them. Dick said they were for people who wanted to trash talk. Funny, but not. 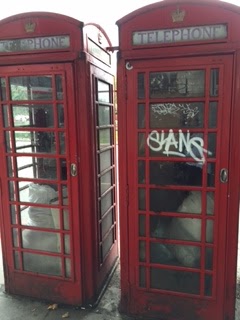 Before we left London I had to make a quick trip to Harrods for a little shopping, of course. Then off to Paddington Train station to get on a train to Stroud where our friend Gill lives. Well we got on the train okay – platform 9 as it turns out. I was curious if we could see platform 9 1/2 (those of you who are Harry Potter fans would know this). We did quite well considering they announce the platform and 3 minutes later they take off. Thank goodness there were two of us to shlep the luggage.

All was going well until we had to get off the train. There is no handle on the door to get out of the train and we had to make sure we were in the right car because Stroud has a short loading and unloading dock and only a few cars can open to their dock. We happened to be in the right car so all was good sort of. A very nice gentleman saw we were a bit frazzled and couldn’t figure out how to get out of the door. He opened the door for us – from the outside of the train because there is no handle on the inside, you have to open the door window and stick your arm outside and open it from the outside. Really, you would think the English could have figured out a better way by now.

Gill was waiting at the station and we were thrilled to see her. When we got to her house, we had a proper English roast dinner (reserved for Sundays normally) and all her children and grandchildren were there. We had a fabulous time catching up with the adult children and watching the grandchildren run about. Then we were introduced to how the English tell time. Now you don’t say 11:30 you say half 11. So we were trying to figure out what time we needed to get up and be ready for the next day’s adventure – a bit confusing. Gosh I didn’t think we were that challenged… can’t open a train door, can’t tell time…. what’s next? 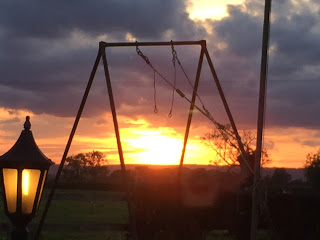 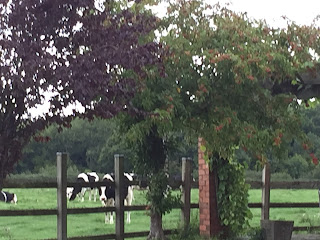